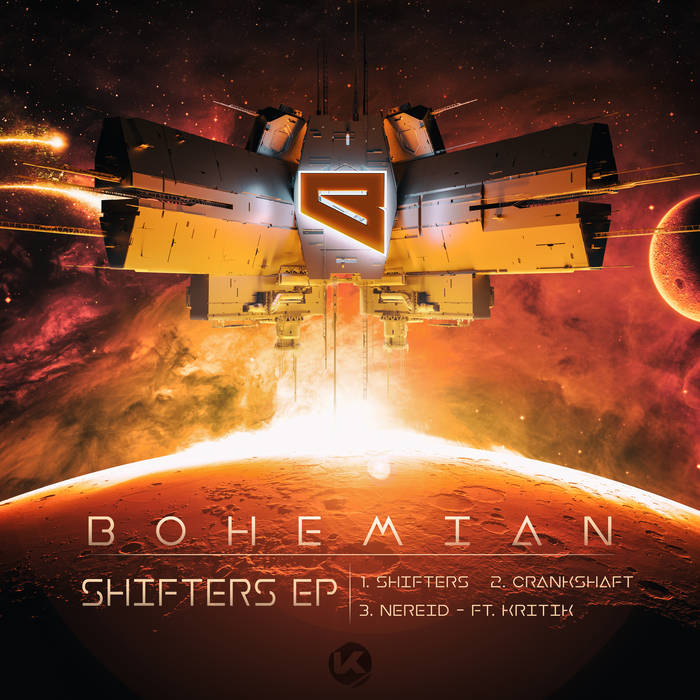 Kosen Production are fast becoming a pillar for independent drum & bass, never failing to deliver nasty slices of bass onto its ever-growing fan base. Founded in 2011, the French label has continued to push the sounds which have made the underbelly of drum & bass thrive in recent years. And they’ve hosted a wide range of talent, whether that be emerging newcomers or the scene’s more prominent figures, including heavyweight names such as Signs, The Clamps and Nickbee. This year is beginning to look even bigger for both the label and its artists, having searched cyberspace for the most up and coming, fresh sounds the genre has available.

One of these artists is Bohemian, and having already released on the likes of Metnem, Dutty Audio and You So Fat, he returns with an aggressively tactile EP ‘Shifters’. It’s as hard hitting as you’d expect, especially being on a platform like Kosen and Bohemian ensures he makes his mark on their roster. Title-track ‘Shifters’ rolls forward on clacking drums and booming subs, beginning to build itself segment by segment until it becomes a crashing, angry hulk. It then throws you into undiluted pandemonium, with rattling percussion and an undeniable groove. Alongside lofty atmospherics and clicking hi-hats, the track isn’t too overbearing and Bohemian penetrates your ears with his creeping menace.

‘Crankshaft’ begins next, focusing heavily on its metallic instrumentals, before pumping up on crushing snare and crashing drums. The groove in Crankshaft’ grabs you instantly, becoming an undeniable force from start to finish. Bohemian provides both the neuro and the funk, epitomising why the subgenre still detonates crowds worldwide. And finally, Bohemian joins Kritik for ‘Nereid’. Both Bohemian and Kritik bring their distinctive sounds, drawing out a dark and mysterious monster that snaps at you with its jaws. A more minimalist record compared to the rest of the EP, it still surges with every crack of bass and smash of skittering percussion. Reminiscent of more late night vibes, both artists end the EP on a production crescendo. The ‘Shifters’ EP is another win for both Kosen and Bohemian, moving against the tide for yet another stellar release.